Is it just me, or am I seeing more street violence just about everywhere? The nights are seething with this amorphous, pointless anger. Anyone who’s ever manned a barricade or picket will tell you that rage of this type is contagious and dangerous. In its most common expression, rage usually connotes a powerful upswell of mindless anger, but it could just as easily be about any negative emotion–grief, fear, disgust–rarely do you get a monolithic expression of a single grievance. The difference between protest and riot, sorta thing. We’ve seen how nascent rage is being been ruthlessly exploited by demagogues, and we’ve read a lot about the ‘why’ of it, but much less about the ‘what next’.

So, what happens when carpe diem becomes a battle-cry, or when a whole generation screams YOLO! and votes with their fists?

Much of the blame for this contagion of street violence has been laid at the feet of the ‘elites’ who, by virtue of birth, wealth, class, power, celebrity or influence, appear to have a greater say. And this sense of unfairness and powerlessness pisses folk off. I like George Clooney, for example, but do I give a damn about his views on Syria? Or Bono and the clear-felling of Amazonian rainforests? Angelina on the plight of Haitian refugees? Sean Penn on the crack in the Larsen ice shelf? They made stacks of $$$ pretending to be interesting people; in real life, they’re dull whiny dissatisfied biatches like everybody else. Stick to your day job, George & Co. if we want advice on something specific, we’ll ask the experts.

Whoa there! What’s all this about ‘experts’? Sounds a bit elitist, doesn’t it? Who are these experts, anyway? Poindexters with no life experience I bet; never set foot in the University of Life or the School of Hard Knocks. And what do they know?  Anthropocentric climate change? What you call a 97.1% consensus is what I call a 2.9% doubt. Same with immunisation, and multiculturalism, and all this gay-marriage nonsense. It’s just unnatural. Says so in the Bible. So no, I don’t care what your liberal-stooge expert says, my subscription to Brieitbart and The Drudge Report is all paid up, the radio in my truck is rusted-on to Alex Jones/Allan Jones, depending which continent I’m on, I know what I know. You can’t trick me!

Now hold on there Einstein, step back a bit. So the angry guy in the trucker cap and flannelette shirt feels justified, vindicated perhaps, at throwing a brick at you because … ? Because his income, unlike the elites, hasn’t gone up in two decades. Because, unlike the elites, nobody in the gubmint is listening to him. Because this country, thanks to elites, is overrun with foreigners. Because them women, stupid elites, are all uppity now. Because fags, most of ’em elites themselves, have forgotten their place. Because Bible studies is a now a thing of the past. Because you can’t call a spade a spade no more. And because you’re always threatening to take away our guns. So it’s okay to throw a petrol bomb at a cop, because cops are the pawns of the elites.

It’s easy to parody unsophisticated people. Too easy, and lazy, because maybe they have a point. The undeniable hypocrisy of the elites has been their own undoing. Nobody likes to be the object of contempt. Even more so, people will not be silenced by others who retain the wherewithal to financially insulate themselves from the effects of their own draconian measures. Times are tough, so weekend shift-allowances are cut, but politicians perks aren’t. Employee conditions are squeezed, but the CEO still gets his bonus. A property developer has more sway than a thousand angry mill-workers? What kind of shit world is that? And cops are the pawns of the elites, right? So they deserve everything they get.

What can people do when their peaceful protests are ignored? What can people do when their violent protests are crushed? You need to think it over, because pepper spray hurts. A baton strike hurts. A shield-charge hurts. It’s not police brutality, or paramilitary overkill if you are rioting in the streets breaking the law, damaging property and assaulting people. It’s called the Rule of Law, and yes, you’re subject to it also. You may feel entitled to be angry, but you are not entitled to let your anger get away from you. As much as you may not believe it, there is a better way to get your way.

Oh, and by the way, kid, nobody’s impressed. How to lose credibility one selfie at a time. Just run home to mummy now, you pretentious asshole. 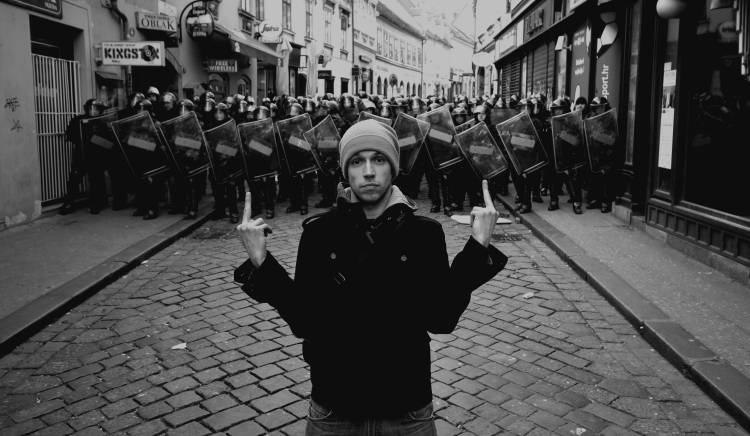