Sometime in the night, one of the Pelioneers got cold and tried to start the heater. For half an hour, he or she punched the pilot-light button over and over again, making a sound not unlike the crack of a pneumatic nail gun. By the end of it, if I’d had a pneumatic nail gun I would gladly have risked an international incident by stapling the clueless idiot to the floor. So, no, I didn’t sleep well, and when dawn finally came, I escaped as soon as I could lash on my urine-soaked gaiters. Today’s target was a measly 8.6km stroll through delightful alpine woodlands to Kia Ora Hut, stop for a hearty lunch, then push on to another overnight camp in the vicinity of the old trapper’s lodge, Du Cane Hut.

The track out of New Pelion begins in a flat clearing bordered by Douglas Creek, which like others in the area was grossly swollen by the record rains. Less than an hour down the track, which slowly ascends towards a saddle between hills, I was reminded me of a lesson I thought I’d already learned: don’t fall over and put a tree branch through your hand! While dicking around with the straps on my hiking poles, I slipped off the track into a deadfall of semi-rotted branches, one of which put a hole through the webbing of my left thumb. No pain, and surprisingly little blood, so I rinsed it with 100% pure Tasmanian highlands rainwater then wound strapping tape over it. Fixed, and feeling a bit foolish, I paused to reflect on my own mortal frailties while balancing on a slippery rock on the lip of a flooded river, then carried on. 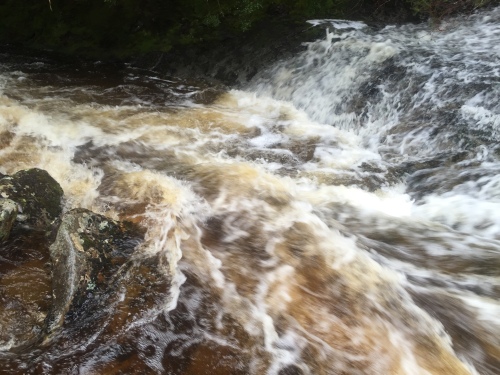 The OLT then climbs to a mountain pass, Pelion Gap, where you emerge from more fun sylvan adventures among the knotty muddy tree-roots to an exposed ridge, so suddenly that it’s like a punch to the face. Pre-warned, you’d be wise to stop for a cup of tea within the treeline and to throw on that extra layer, because Pelion Gap is exposed, cold and windy. I then came to a platform where some intrepid souls leave their packs to the mercies of the local corvid population, and have a tilt at summiting Mt Ossa, which at 1617m is the highest mountain in the state. I was disappointed to see it wreathed in heavy cloud, and after snapping more dull grey photos continued on with a shiver. Looking back over my shoulder, I saw the single most perfect vision I’d yet had — Mt Pelion East against a perfect blue sky with sunlight glinting off its turrets and boulderfields — but before I could fish out the iPhone, the clouds snapped shut like the curtain at finale, and so what lingers in my memory is nothing like what I salvaged on my memory card.

The descent from Pelion Gap through Pinestone Valley was a visual treat, a highlight despite the bitter cold. Enjoying it while I could, the track soon resumed its impersonation of a creekbed, and while splashing merrily downhill I met another European fella who told me, helpfully, that the track ahead was really wet. I exhausted his store of English by asking him how far I was from the next hut (“Ja, tomorrow!” was his answer) then left him slogging uphill against the current. Kia Ora just kinda appeared from around a corner with little fanfare, was totally empty when I arrived, and retained the lingering residual warmth of the previous occupant. I started the heater on my first attempt and this, as much as anything, triggered my executive decision not to go any further. It was also, inexplicably, closer to 2pm than midday, and I knew the next leg to Windy Ridge would take me five hours — ie. the last two in darkness.  Two hours in the dark?  Not this little black duck, as we say here in Oz. 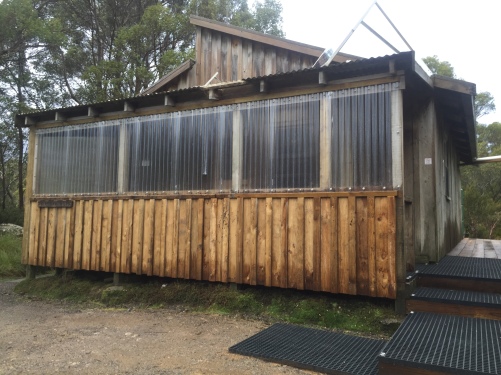 So, happily, I settled down to lunch. I had changed into drier clothes, and was chowing down on some noodles when the Swiss couple caught me up. When the female of the pair laid eyes on me, I was sure she said Scheisse! under her breath but I couldn’t be sure. I remember that word from the first Bourne movie, the scene where Marie is messing about with her keys in the alley behind the American embassy, and I had a fair idea what it meant. I couldn’t be certain though, until some hours later in the middle of the night when I turned in my sleeping bag to face the wall and did such a good imitation of a duck flying into a cement-mixer that I even woke myself up. Scheisse! I heard her whisper in the darkness from the other side of the room. Umm, sorry lady. But if it’s any consolation, after a quick dash through the frigid night to the toilet, I had best sleep of the entire trip.