Today’s morning news: the manhunt for the ‘Facebook Killer’ is over because he stopped for McNuggets; the Vice President wants to show Pyongyang how to launch a goddamn missile; and the Boston Marathon is on today — but there’s nothing to fear because police are using drones. Drones! Thanks God. Safe at last! Thus fortified, and with exhausting plans for the day, we enjoyed a nutritious breakfast before our short walk to Grand Central Station.

Hey, the New York Subway! Was it special in that Seinfeldian way? No, nothing special about it, a train in a tunnel just like anywhere else in the world. Off at Brooklyn to walk the bridge, which was amazing despite the overcast conditions, and despite the cavalcade of halfwits who stop in the middle of the path with elbows spread to take photos of all the brown-painted cables. I wanted to see at least one posing halfwit clipped off the bridge into the East River by a cyclist coming at you at sixty miles per hour, but it didn’t happen. 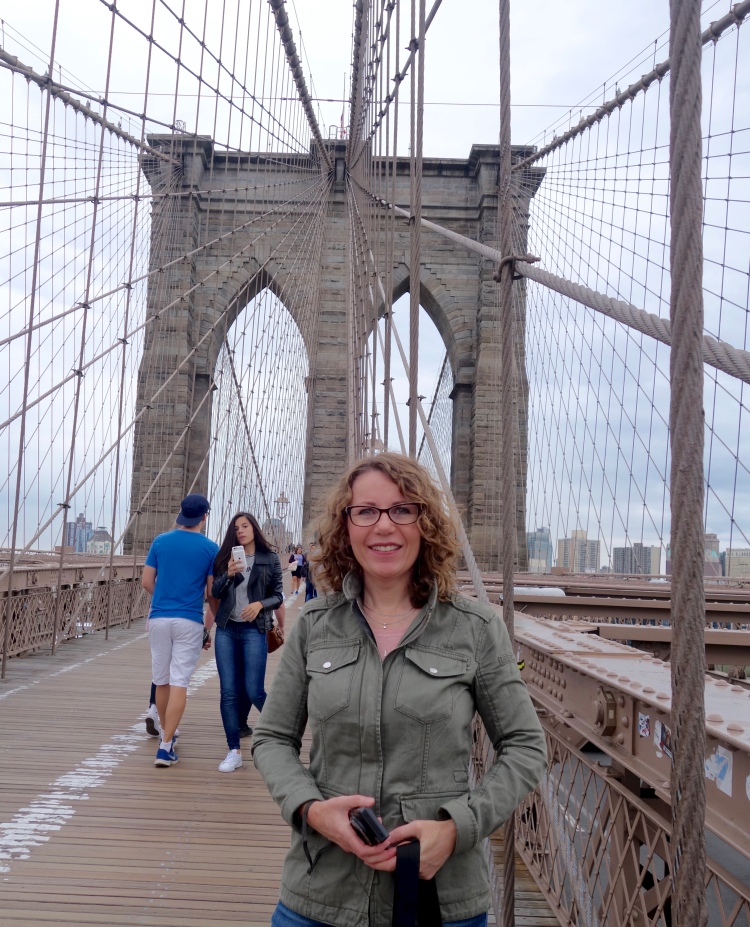 So we got off the bridge without mishap and walked down to the spot on the shoreline  where you’re supposed to take photos of the NY skyline. Except it was grey on grey and not so photogenic, with us interrupting some mayoral event christening a ferry called the Lunchbox or something. Hey, the Mayor of New York! I thought there would have been more cops around, but I counted about six and not one of them was above 5’6″ in height, not that there’s anything wrong with that. They were all being very situationally-aware, I’m sure.

Stopped at Grimaldi’s for lunch not knowing it’s a ‘famous’ pizza joint until later — guessed as much by the interior, which hasn’t seen a loving hand in fifty years. Delicious pizza, which is all that matters. Back over the bridge, we walked Wall Street from end to end and were singularly unimpressed by this mean little street. Found our way to the Charging Bull, draped in tourists, and my wife took her turn to pose beside Fearless Girl. What a plucky little statue. It should remain forever.

We visited the National Museum of the American Indian where I enjoyed another bag-check because I really wanted to see some authentic bow & arrows; satisfied, we grabbed the Staten Island Ferry to … Staten Island, then performed a u-turn and returned to the ‘mainland’. Statue of Liberty photo opportunity for cheap-asses. Pretty cool to see that famous green statue standing guard / welcoming arrivals to New York. 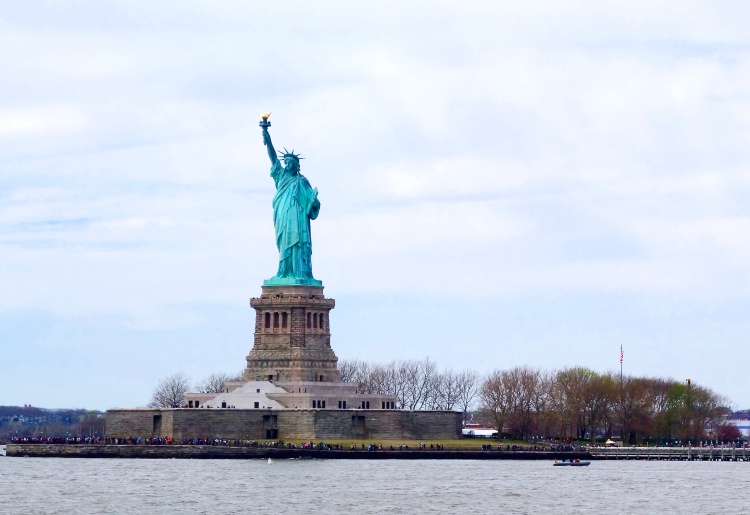 I trust Americans appreciate how iconic it actually is. It was on the very short list of things I absolutely had to experience. Awesome! We grabbed a couple of slushies to sip on a bench at the Bowling Green, admiring the blooming tulips and the amazing architecture. Then back up Broadway to catch the train home. Staggering home from Grand Central, it was all I could do to have a bite to eat, a glass (or two) of wine, and off to bed.