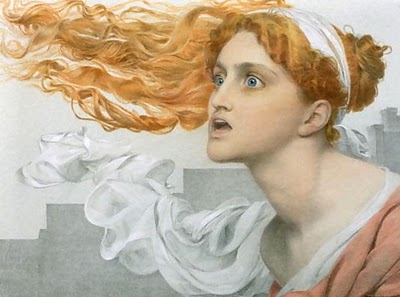 Cassandra was a daughter of King Priam of Troy, and sister to that troublesome idiot Paris. A famous hotty herself, she caught the godly eye of Apollo, who gifted her with prophecy (being himself of the oracular bent) before attempting to get jiggy with her. Spurned, the sulky god cursed Cassandra’s new power, so that none would believe her. Example: “Don’t bring that bloody great horse in here!” but of course they did, and with her house butchered, Cassandra hid in the temple of Athena where she was found by Ajax and raped. A spoil of war, she became the plaything of Agamemnon on the Love Boat cruise back to Mycenae, all the while knowing Clytemnestra was waiting for them with her knives (or, in poor Cassandra’s case, her axe).

In modern times, when they call someone a ‘cassandra‘ they mean someone who has the ability to predict (usually negative) events that have business, political, or environmental significance. Interestingly, the cursed-aspect of the term ‘cassandra‘ has been lifted, if not by Apollo himself, then by its eager human appropriators, all of them anxious for a reliable visioning of the future. That said, minor prophets walk among us every day. My wife consults the jeremiahs of the Bureau of Meteorology each morning before making any critical decisions, such as whether she’ll be straightening her hair, or wearing ballet flats. We now have analysts, statisticians, quants, economists, logisticians, actuaries, psychologists, epidemiologists, magistrates, science fiction writers — all (but the latter) these modern scryers get handsomely remunerated for guesstimating the future.

But you don’t need a degree in the data sciences to exercise your native nostradamic abilities. Why? Because life is a whorl, to borrow from Radix (1981) by A.A. Attanasio, whose vision of a mutated future humanity admittedly draws a much longer bow than the climate-change peril predicted by George Turner in The Sea and Summer (1987). In 1998, Octavia Butler forecast the Trump campaign (‘Make America Great Again’) with eery accuracy. Arthur C Clarke famously predicted a heap of stuff, including iPads (‘newspads’) back in the 50’s and 60’s. In fact, some scifi writers (such as Margaret Atwood) are so self-conscious of this monstrous ‘gift’ that they insist on being called speculative-fiction writers, rather than science-fiction writers, aware that some of their outlandish ideas may come true. Why? Because life is a whorl: their fiction about tomorrow doesn’t need to deviate much from what’s happening today.

And there’s the trick. The best predictor of future behaviour is past behaviour. Putting aside gross oversimplifications, forecasting just doesn’t have to involve blind luck. For example, on the basis of facts I know to be historically true, in combination with an objective assessment of what I know to be presently correct, I predict that a thermonuclear device will be detonated by a rogue state in a contested zone within the next five years; and that the concerned citizens of Western nations will lap up all the horror streaming direct to their Twitter feeds, but do fu*k-all about it. The only thing I’m unsure about is whether the blow will come from some stone-age intellect in a headscarf, that nuclear ninnyhammer in North Korea, or from Comrade Trumputin himself.

But it doesn’t have to be the big-picture stuff. For example, I know that I have to get up reasonably early tomorrow, and that if I don’t go to be now (it’s 2:20am) then I am going to be a grumpy pain in the ass. I don’t need no crystal-ball for that!